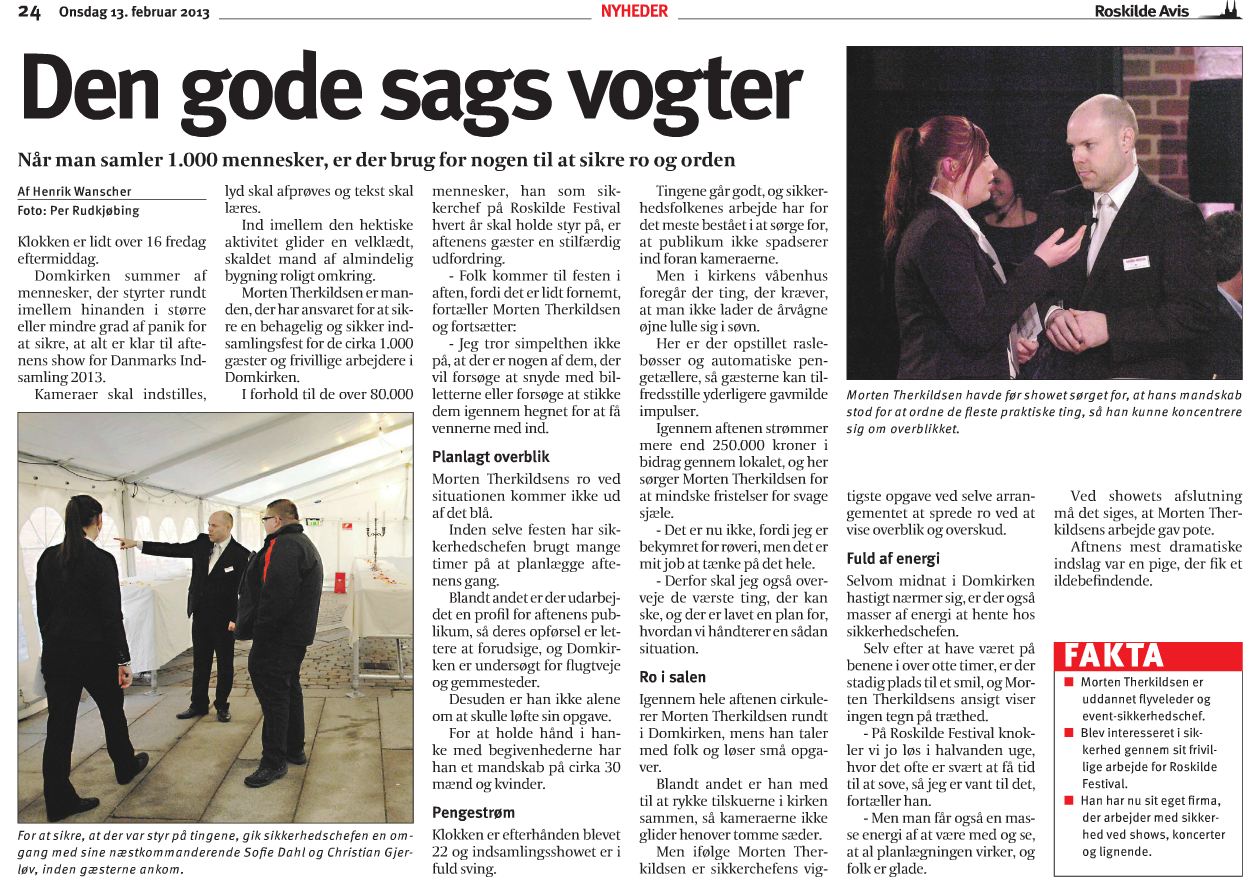 Read the article on safety work in relation to running Denmark's national charity collection in East Denmark. Morten Therkildsen talks about some of the thoughts and reflections he makes in connection to such a type of event. The article here was brought in Roskilde Newspaper Wednesday February 13th.

Listen to Morten Therkildsen's opinions on the news on DR1regarding the Love Parade in Duisburg, Germany where 21 people died in 2010.

Focus is, among other things, on whether proper crowd management was applied when the venue was attended by 6 times the number of people than the capacity / permit allowed.


The quality of security personnel

In 2010 ConCom Safety published an academic study of the quality of Danish security personnel (Stewards).

This study has just been published in The Journal of Crowd Safety and Security Management.

ConCom Safety has used the knowledge, gained from this study, to improve training levels among its own staff, as well as create a training department.

A study into competence, training and reputation of event safety stewards in Denmark,
Morten Therkildsen. Page 35-47.

In June 2012, Morten Therkildsen was interviewed by the metalmagazine Devilution. The interview led to an interesting article about metal fans and working with security at various events.

Following the IQ Magazine theme for Crowd Safety Management in September 2010, Morten Therkildsen was asked to write an article for Comment Section in the November edition. In this article you can read about Morten's position on how security events can be improved at an international level.

At the 10th anniversary of the accident at the Roskilde Festival, IQ Magazine elected to create a theme about the development in Crowd Safety Management. Roskilde Festival has since helped paving the way for international standards and cooperation across national borders and organizers. In the main article a study, which ConCom Safety has made, is quoted.

As a result of a major study by ConCom Safety Morten Therkildsen has been invited to speak at the Sports Forum Switzerland 2012. This is the biggest sponsor conference in Switzerland, which includes a security forum. But due to the relevance for the participating parties, the lecture was held on the main stage in order to make it possible for everyone to hear his presentation.